Mix the plums and apples with sugar and lemon juice. Let it stand in room temperature covered for one day. Add the cinnamon sticks and let it all boil at least 20 minutes.

Fill the jars with jam until top. Let the jars cool upside down.

Use any fruit or combinations of fruit that you want! 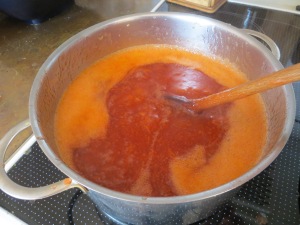 Purée the plums and add sugar, cinnamon and rum you like.

Can be eaten with anything, we had it with vanilla ice cream and on top of a crumble – yummy!